Mobile menu: created seperately due to color variations( down)

The Papanui Toc H Athletic Club Inc was formed in 1982.
It was created out of the amalgamation of the Papanui Redwood Athletic Club and the Toc H Track and Field Club both of which had a strong history with the sport. The Toc H Harrier club added its strength to this club in 1987.

Today the club still continues to be a strong force in athletics and has achieved success across all aspects of the sport. Over the years our members have competed at all level from Olympics, World Championships, Commonwealth Games along with national and local competitions.

Currently the club has a membership base of over 300 consisting of 220 junior athletes between the ages of 4 and 18 years of age and 61 senior, U20 or masters athletes.

The club and its facilities are based at the Papanui High School with entry to the clubrooms and parking through the main entrance on Langdons Rd.
On the school grounds you will find our grass 400metre track, 4 throwing circles, 3 training circles and an all weather long jump run-up.

We also have a 4 lane 100m all weather training strip, additional long jump and high jump apron. This provides a good training surface for our jumpers (including pole vault), sprinters, hurdlers and javelin throwers. This is a $150,000 investment that the club has put into the ground with assistance from NZCT and local business.

Also located here are our clubrooms.

WHERE AND HOW IT BEGAN.

A HAVEN IN FLANDERS.

As a quickening spirit, Toc H was born in Bethlehem. Visibly and tangibly it was born in Flanders – where the poppies grow. It is the largest Poppy of Remembrance.

Of all evil parts of the British line on the Western Front in the Great War of 1914-1918, the one with the worst reputation was the Ypres Salient. Ypres itself was no mean city, which the Germans made repeated efforts to capture. Their bombardments destroyed it, but it never fell into their hands. There was murderous fighting for the Salient in every year of the War. Passchendaele, fraught with tragic memories for New Zealanders, was part of the struggle. There were three Battles of Ypres, each lasting weeks or months, and bombardments were ceaseless between. In mud and slush and squalor soldiers from every part of the Empire, at times, fought to defend the Salient or to extend it. The name Ypres because a symbol for unyielding resistance. Of 1,150,000 men from all the British World who made the supreme sacrifice on all fronts during the War. 254.000 – nearly a quarter – fell in this small sector. And Ypres had the same significance, of sell-sacrifice and heroism, for the Germans.

Out of this agony Toc H. as we know it, was born. It is not a military movement. but the War, almost by a paradox, produced it. “Out of the strong came forth sweetness.”

THE OLD HOUSE IN POPERINGHE.

Just behind the Salient was the little village of Poperinghe, situated in a funnel through which men passed ceaselessly, in their thousands, to and from the front. It was the nearest place to the lines where a soldier could hold his head in the air without risk of losing it. Its people carried on, not indeed their ordinary occupations—those had lapsed for the most part -but new ones they had found in catering for the troops, performing them—think-what a relief for the “Digger” in a civilian manner. Towards the end of 1915 a soldiers’ club was opened in Poperinghe by three padres, Neville Talbot, Harold Bates and Philip Clayton— “Tubby” to the family soon to be formed. It was given the name of Talbot House, in memory of Neville Talbot’s brother Gilbert, who had been killed in the first liquid fire attack near Hooge. (The Salient, three months later, had also seen the first gas attack of the War, which fell heavily upon the Canadians). The name Talbot House was shortened by the troops to its initials, which they pronounced according to the Army signallers’ convention as Toc H.. At the end of November, as the hew home of the club, a tall white house was rented from its Belgian owner, and its big doors were opened on December 11th, not to close again till its enforced evacuation in May, 1918. It re-opened in the following October, when the War was ending, for a few months.

In the tall white house, remembered now as the “Old House,” and visited, since the Great War, by countless pilgrims to Ypres, Toc H had its first home. It has been called a lighthouse, and its beams have spread to most parts of the world. It was a good deal of a hostel, and that purpose which it served was recognised when Tubby, who took charge of it with the official title of “Garrison Chaplain of Poperinghe,” was called “The Innkeeper.” But it was much more than an ordinary inn, because the men who came to it, on their way to and from the trenches and between shifts of service, came from all parts of the Empire, and everything was done there to make them forget that they were soldiers, under machine-like discipline in a strange land, and to make them feel at home. The first home of Toc H was as unmilitary as anything could be in an army. It was a place of fellowship and refreshment. The widest possible welcome was given by its sign-board:

“All rank abandon, Ye who enter here” was the legend over the doorways of the Chaplain’s room and of a writing room. The General entered on the same terms as the humblest “digger”— something revolutionary for the British Army, though it might have seemed natural enough, off service, to a New Zealander. But this was so near to the tension and rigours of service, to bombardments and the pitted desolation and duckboards and trenches, and the contrast was so complete. Toc H was refreshment to mind and body—and for more than those.

THE HEART OF TOC H.

Many who entered the House found all they wanted on the Ground Floor. There were amusements, magazines, a canteen, means for writing home. On the next floor was a Library, and above that were bedrooms. On the same floor as the bedrooms, until February, 1916, and after that, higher still, was the Chapel, known after its ascension as the Upper Room. There was a garden and a notice which read “Come into the garden and forget about the War.” Other notices of Toc H had a character of their own which has descended to its branches. One, with a hand pointing to the street, proclaimed “Pessimists, Way• Out.” “This is a library, not a dormitory,” read another. And again, “If you are in the habit of spitting on the carpet at home, please spit here.”

Clubrooms and Track at Papanui High 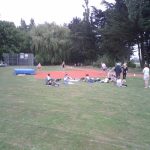